Weather forecasting at the Met Office is widely associated with rain, wind, snow and sunshine. What may not come immediately to mind, is forecasting the temperature of the sea surface or the sea state for shipping and safety at se

Weather science at the Met Office, however, includes all this and more. Perhaps even more surprisingly, a deep understanding of the ocean is an important aspect of weather prediction.

The Met Office Ocean Forecasting Research and Development (OFRD) team is responsible for developing and managing ocean models for global and regional marine forecasting. Some of the key outcomes of the team’s work include forecasts of surface waves, storm surges and a detailed prediction of ocean hydrodynamics and biogeochemistry.

In this complex area of science, ocean-themed acronyms are all the rage. For instance, the Forecast Ocean Assimilation Model, known as FOAM, runs a daily operational forecast. Global, regional and shelf-sea configurations of the model all use a modelling code base named after everyone’s well-known favourite clownfish, NEMO (Nucleus for European Modelling of the Ocean).

However, although the names may raise a smile, this model is no joke, ultimately helping to save lives at sea. It also uses a state-of-the-art community code that provides a framework for ocean modelling. Together with European partners, marine data assimilation scientists in the OFRD team have developed a system called NEMOVAR that assimilates a range of observations into the ocean model. Using these observations in combination with estimates of spatial correlations in the ocean, NEMOVAR adjusts model simulations to give what is called an analysis – the best match to the real ocean through combined observations and modelling.

One of the new operational systems recently developed by scientists in OFRD is a regional North-West European Shelf-Seas model that uses NEMO ocean model and NEMOVAR data assimilation codes. The image below shows the sea surface temperature output. The new system has a 1.5 km horizontal resolution, currently the highest-resolution operational regional model as far as we know that assimilates observations. This latest configuration also includes atmospheric pressure and wind forcing, surface water runoff and tides. 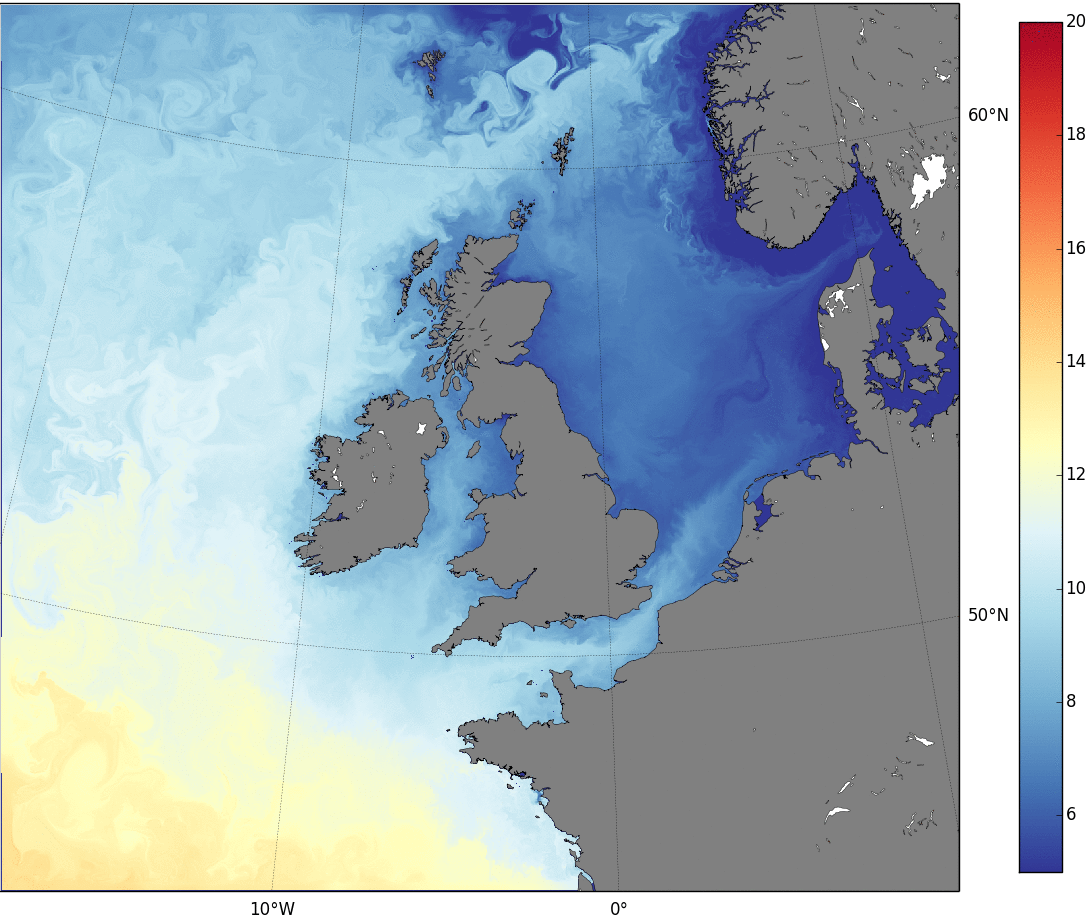 The 1.5 km resolution model provides a better representation of dynamical features such as internal tides, frontal jets and mesoscale eddies that can vary in size from only a few kilometres in shelf-seas to tens of kilometres in deeper oceans. (The image below shows a snapshot of the ocean currents in the 1.5km model). A better representation of these features is important for accurately predicting currents, mixing and the density profile of the ocean that describes how the density of the water changes with depth. In the ocean, the density of water varies both with depth and horizontally due to changes in the temperature and salt levels known as salinity. These changes are caused by many different processes such as heating, cooling, mixing and cooler water from the deep ocean rising to the surface in a process called upwelling. The model must accurately represent all these processes to predict the density profile accurately. 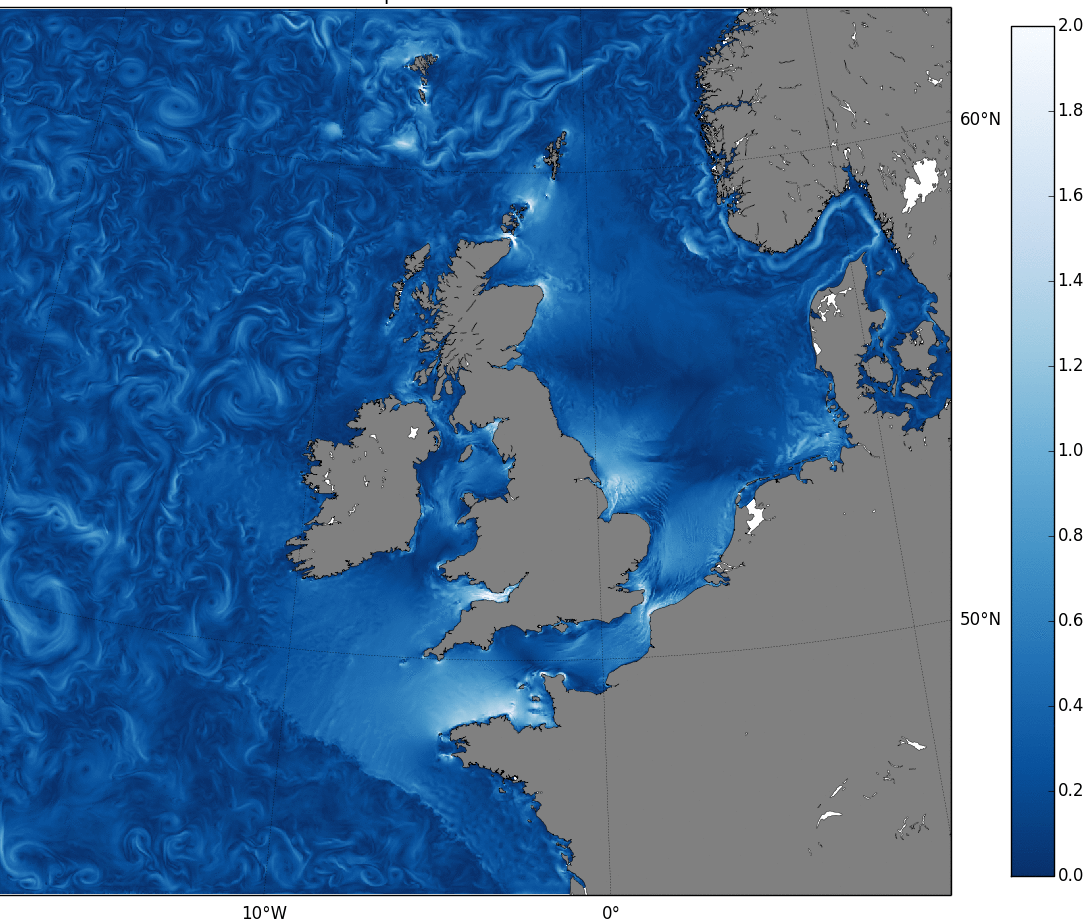 In turn, the density profile is an important part of predicting the sea surface temperature and exchange of heat and moisture between the ocean and atmosphere. Accurate surface currents, together with near-surface winds  (the wind speed from the model at 10 metres above the sea surface), are essential for predicting surface waves. At the Met Office, surface wave prediction is provided by the wave model WAVEWATCH III that uses information from the shelf-seas model and winds from the global atmosphere model.

The OSTIA system, a coupled global ocean-atmosphere model and the regional model products, are all available online as part of the Copernicus Marine Environmental Monitoring Service (CMEMS). Copernicus is a European Earth Observation Programme, and CMEMS provides a huge range of information on the physical state and dynamics of the ocean. CMEMS is now introducing new improvements, adding to the existing models. These include coupling the wave model in the North-West European Shelf Monitoring and Prediction Service to the shelf-seas (ocean) model.

Despite the considerable complex challenge, CMEMS is continuously evolving to provide users with an accurate, reliable, state-of-the-art marine monitoring system, with open and free access to all products. The core information system is available to both the commercial and research and development sectors, benefitting a variety of areas including maritime safety, coastal and marine environment, marine resources, and weather, seasonal forecasting and climate activities.

So, the next time you think of the Met Office and forecasting, remember it’s not just about rain, wind, snow and some sunshine, it goes way deeper than that.

Find out more about the Met Office's ocean forecasting.

A catalogue of all the Copernicus products is available at http://marine.copernicus.eu/about-us/about-your-copernicus-marine-service/