Tropical cyclones develop in tropical oceans at least 5° - 30° latitude north or south of the equator, where the sea temperature is at least 27 °C.

Tropical cyclones are important on Earth for transferring heat and energy between the equator and the poles. Low pressure occurs either side of the equator and together with the air heated over the warm tropical ocean, results in thundery showers. Occasionally, these thundery showers group together creating rapidly rising warm air which leads to the development of a low pressure centre.

Several conditions are needed for a tropical cyclone to form:

Further aloft at about six miles, as winds spin inwards and upwards releasing heat and moisture, a cylinder of deep thunderclouds (cumulonimbus clouds) form; the cloud tops are carried outwards by the outward-spiralling winds leaving the tropical cyclone core cloud free. The cloud free centre of subsiding air, which is often dry with little wind, is referred to as the eye. 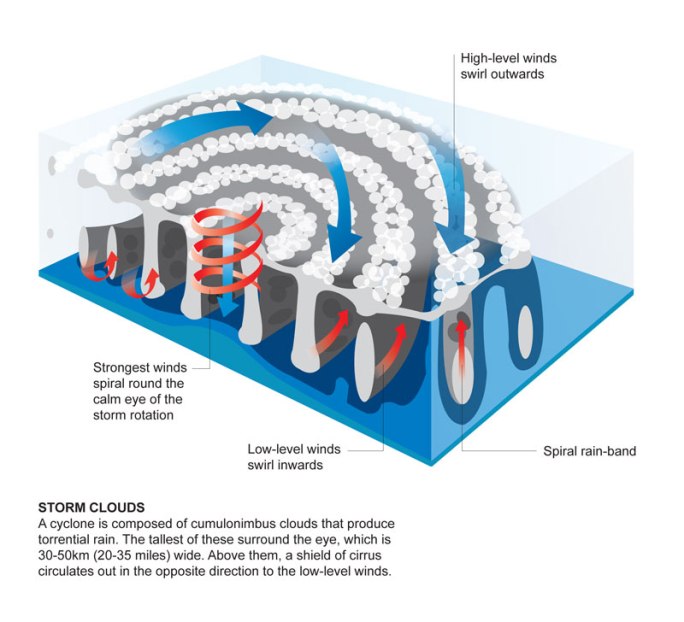 There is a relatively small area of intense horizontal winds at the surface, often well over 100 m.p.h., while air rises strongly above, maintaining the deep cumulonimbus clouds.

The energy which drives a tropical cyclone is transferred as warm water is evaporated from the tropical ocean. As the air descends, almost all, around 90%, of the stored energy is released by condensation. This release of heat energy warms the air and the pressure decreases further resulting in air rising faster to fill the area of low pressure. As the air rises; warmer, moist air from the ocean is driven into the system creating further energy and resulting in the tropical cyclone becoming a self- sufficient system. If the tropical cyclone travels over land, the energy source (tropical ocean) is lost which results in the eventual breakdown of the storm.

As little as 3% of the heat energy may be converted into mechanical energy of the circulating winds. This relatively small amount of mechanical energy equates to a power supply of 1.5x1012Watts - equivalent to about half the world-wide electrical generating capacity!