What's the longest distance travelled by a single tornado? Find out some interesting facts about tornadoes.

The greatest distance travelled by a tornado is 219 miles (352 km) from Ellington, Missouri to Princeton, Indiana on 18 March 1925.

2. The greatest number in 24 hours

The average annual number of tornadoes per state is: 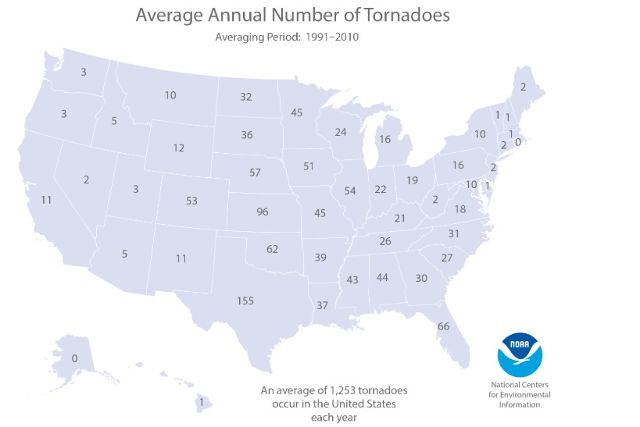 This chart shows the average number of tornadoes per state in the USA each year, measured by NOAA between 1991-2010

Most continents have regions with favourable conditions for tornado formation.

5. The greatest number in a month

The most tornadoes recorded in a single calendar month is 817 during April 2011 across the USA.

The ‘Tri-State Tornado' on 18 March 1925 is known as the deadliest, killing 695 people. This tornado also travelled the furthest distance.

It is impossible to know the exact strongest wind speed as they are only directly recorded in weaker tornados before weather instruments are destroyed. Doppler radars can give some remotely sensed wind speeds although these are not always accurate. Despite this, on 3 May 1999, a tornado in Oklahoma was measured to reach 302 mph, the highest winds ever found on the Earth’s surface. The most violent tornadoes have never been captured.

9. What is the costliest?

The costliest tornado was in Joplin, Missouri on 22 May 2011 with an estimated cost of $2.8 billion in damage.