The foehn effect causes warming and drying of air on the lee side of cross mountain wind.

What is the foehn effect?

In simple terms, this is a change from wet and cold conditions one side of a mountain, to warmer and drier conditions on the other (leeward) side.

Foehn winds (sometimes written "Föhn") are common in mountainous regions, regularly impacting the lives of their residents and influencing weather conditions for hundreds of kilometres downwind. Their notoriety has led to recognition by a multitude of names including: the Chinook or "snow eater" of the North American Rocky Mountains; the Zonda of the South American Andes; and the Helm wind of the English Pennines.

On 14 - 15 January 1972 in Montana, USA, a foehn chinook event was responsible for the greatest temperature change over a 24 hour period ever recorded in the United States: according to the US National Weather Service the temperature rose a staggering 57 °C; from -48 to 9 °C.

In the UK, the most notable foehn events tend to occur across the Scottish Highlands where the moist prevailing westerly winds encounter high ground along Scotland's west coast. This results in a marked contrast in weather conditions across the country with the west being subjected to wet weather, whilst the lower lying east enjoys the warmth and sunshine of the foehn effect.

Impacts of the foehn effect

Regions under the influence of foehn experience warmer, drier climates and a longer crop growing season than they otherwise would. However, it is the foehn's adverse effects that grab the headlines. The warmth it brings can increase the risk of avalanches in ski resorts, cause glacial melt and downstream flooding, and contribute to the disintegration of ice shelves in the polar regions. Foehn windstorms regularly cause damage to property and infrastructure, and are a serious hazard to climbers - most notoriously so on the Eiger's north face. The combination of warm, dry air and high wind speeds promote the ignition and rapid spread of wildfires. In California, Santa Ana winds are responsible for the majority of major wildfires, including 12 fires in October 2003 which burnt an area of over 300,000 hectares, causing more than $1 billion in damage to property.

The effect of foehn on mental well-being is the subject of folk law in Alpine regions: the phenomenon has been linked to depression, suicide, madness, headaches, sleeplessness and crime waves. 'Foehnkrankenheit' (literally Foehn sickness), as it is known in the Alps, has largely only anecdotal evidence, though recent studies correlating migraine occurrence with Chinook winds suggest there may be some truth in it.

Foehn events are often accompanied by dramatic cloud formations above the mountains, such as towering lenticular clouds and lower-level rotor clouds. This is seen in the photo below revealing overturning and turbulence during a foehn event over the Antarctic Peninsula. 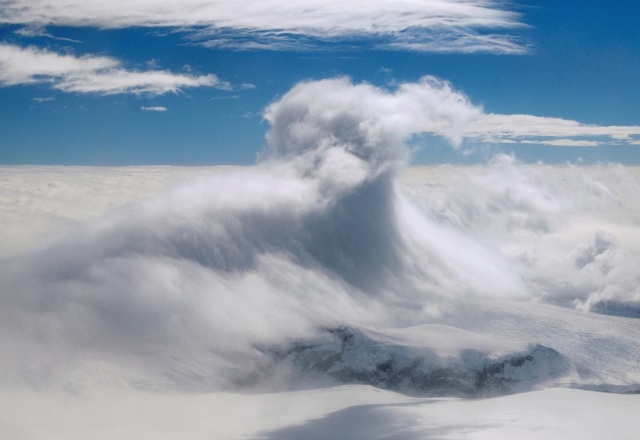 How does the foehn effect work?

Explanations of the foehn effect in popular literature or on the web often single out just one causal mechanism (#1 in the below), but there are in fact four known causes. These mechanisms often act together, with their contributions varying depending on the size and shape of the mountain barrier and on the meteorological conditions, for example, the upstream wind speed, temperature and humidity.

There are four mechanisms which combine to create the foehn effect:

When air is forced upwards over elevated terrain, it expands and cools due to the decrease in pressure with height. Since colder air can hold less water vapour, moisture condenses to form clouds and precipitates as rain or snow above the mountain's upwind slopes. The change of state from vapour to liquid water is accompanied by heating, and the subsequent removal of moisture as precipitation renders this heat gain irreversible, leading to the warm, dry foehn conditions in the mountain's lee. This mechanism has become a popular textbook example of atmospheric thermodynamics and it lends itself to attractive diagrams. However, the common occurrence of 'dry' foehn events, where there is no precipitation, implies there must be other mechanisms.

2. The draw-down of air from aloft

When the approaching winds are insufficiently strong to propel the low-level air up and over the mountain barrier, the air is said to be 'blocked' by the mountain and only air higher up near mountain-top level is able to pass over and down the lee slopes as foehn winds. These higher source regions provide foehn air that becomes warmer and drier on the leeside after it is compressed with descent due to the increase in pressure towards the surface.

When river water passes over rocks, turbulence is generated in the form of rapids, and white water reveals the turbulent mixing of the water with the air above. Similarly, as air passes over mountains, turbulence occurs and the atmosphere is mixed in the vertical. This mixing generally leads to a downward warming and upward moistening of the cross-mountain airflow, and consequently to warmer, drier foehn winds in the valleys downwind.

Dry foehn conditions are responsible for the occurrence of rain shadows in the lee of mountains, where clear, sunny conditions prevail. This often leads to greater daytime radiative (solar) warming under foehn conditions. This type of warming is particularly important in cold regions where snow or ice melt is a concern and/or avalanches are a risk.