We've teamed up with experts at the Royal Horticultural Society (RHS) for their top gardening tips for the month.

What is the average weather in June?

June is the midpoint of the year and a pivotal month in the garden. It is the end of spring and the beginning of summer. The longest day of the year is 21 June with plants receiving progressively more hours of sunlight while temperatures are also increasing.

Guy Barter, the RHS chief horticultural advisor, said: “June marks the beginning of summer and days are at their longest. Although August is often hotter, June has the most sunshine. New plants in the vegetable garden and bedding or container plants need to do most of their growing in June while light levels are high and temperature constraints lowest. Fertiliser will help them make the most of this light for good results later in the summer. Once plants have established there is ample water from winter in the soil to see them thrugh in late summer. Newly planted subjects, however, need careful watering.”

Daylight and sunshine in June

Sunshine hours in June are down slightly from May but, with an average of nearly 179 hours of sunshine, there is plenty of energy from the sun to power plants.

We look at averages using the 30-year average data from 1981-2010. Using this we can see changes in temperature, rainfall and sunshine hours in June.

The UK mean temperature in June is 13 °C. In England, average temperatures are around 1 °C higher than this. In Scotland, monthly mean temperatures break into double figures for the first time in the year with an average of just over 11 °C helping to boost plant growth. However, it is worth bearing in mind that tender plants such as sweetcorn and tomatoes do not grow well below 12 °C. On the plus side, it is unusual to experience much frost in June, even in Scotland.

During June, we would expect to see an average of 73.4 mm of rainfall. Across the UK, June has more rainfall than May but less than July and August. In summer, most rain evaporates before it reaches plants. The amount of water that will soak up during a downpour depends on how dry the soil is. If it is already wet, the soil will be able to soak up more water. Plants use about 25 mm of water every week or so, therefore in June, the soil water reserves begin to reduce.

Find out more about climate records, including breakdowns for the UK, England, Scotland, Wales and even your region, on our UK climate averages page. Changes in weather will have a definite impact on the plants in the garden.

So, what are the tips from the experts at the Royal Horticultural Society on what to do in the garden during June?

Extra light and warmth encourage the garden to burst into life. However, this also means that weeds come up everywhere. You can keep on top of them by shallow hoeing regularly in dry conditions to kill most weed seedlings. For maximum effectiveness, choose a dry day with a light wind, so seedlings dry out on the surface of the soil rather than re-rooting into moist soil. Just a little bit of hoeing will help keep things under control. 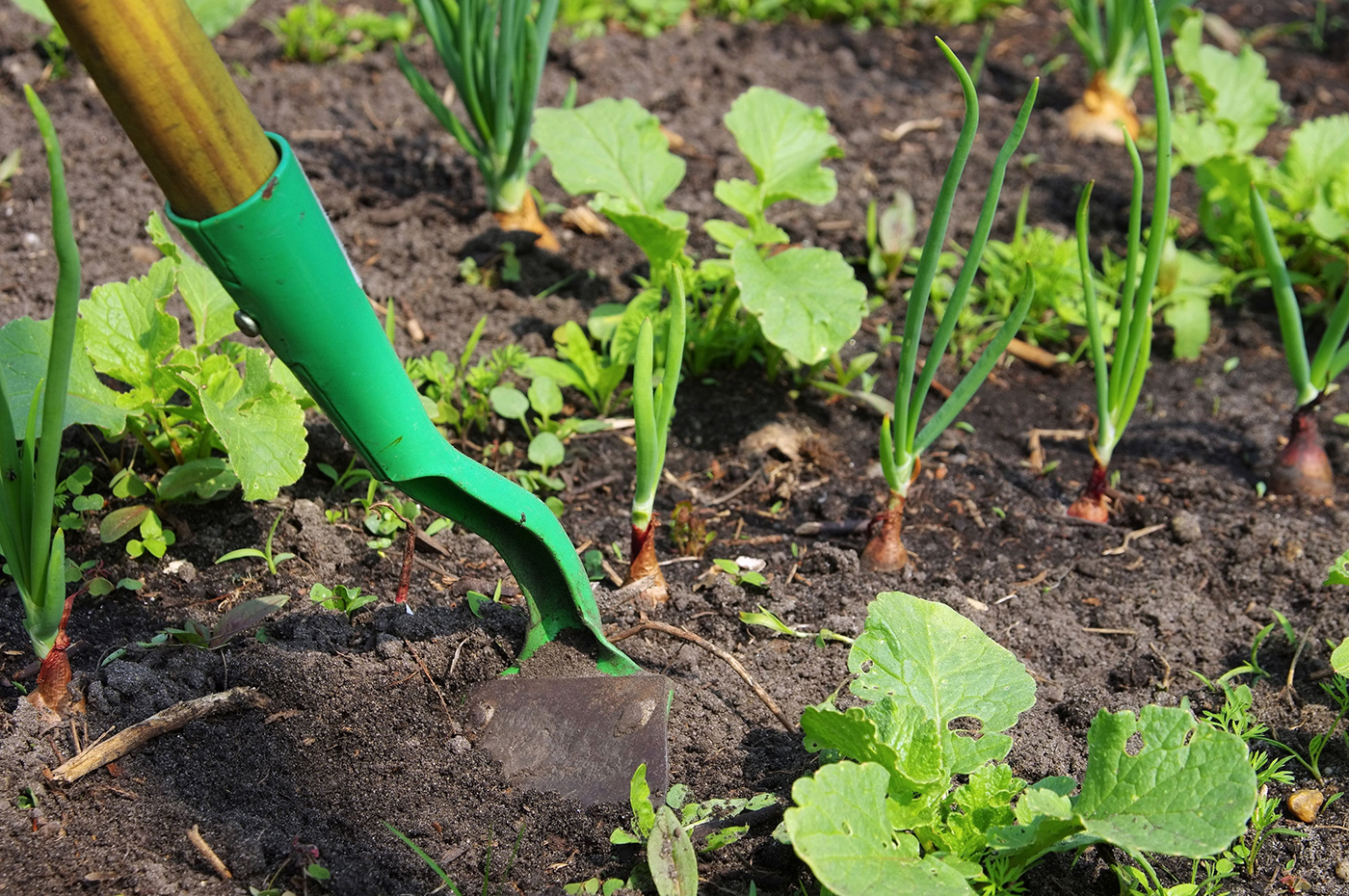 It is important to water regularly during June, especially when it comes to pots and other containers. Happily, these will make good use of wastewater from the kitchen. It is worth using two-thirds of the water in water butts in June. If there are some thundery downpours later in summer it will top them up nicely, perhaps enough to see you through until the autumn rains. Established trees and shrubs do not generally need watering, whereas newly sown or newly planted areas should be high priority. 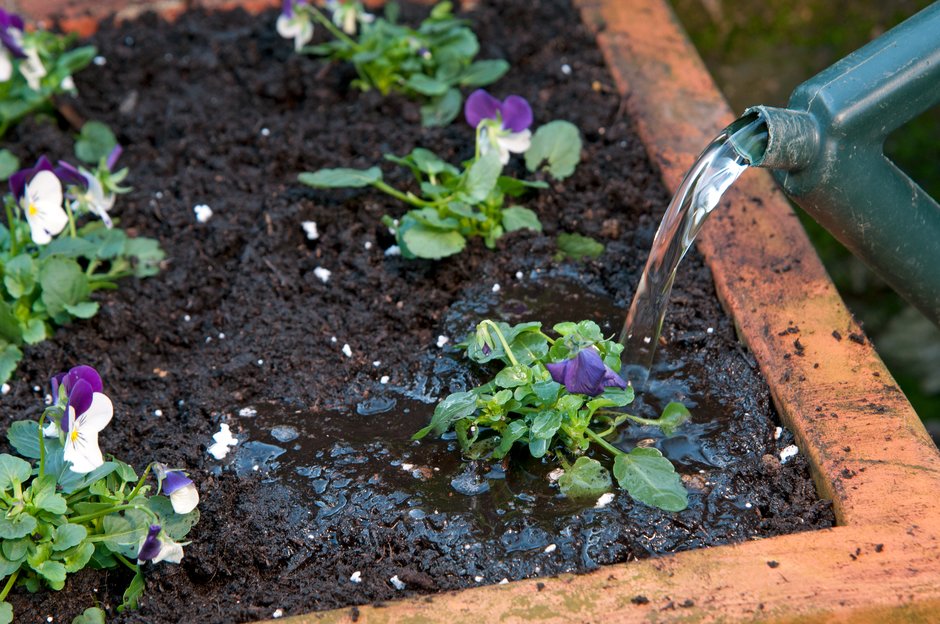 Planting out and potting up as early as possible in June makes the best use of light and warmth. ‘Puddling in’ is a good way to set out plants in hot and dry weather. Make a hole that is the right size for the plant’s root ball and fill it with water several times before placing the plant in the hole and firming the soil around it. 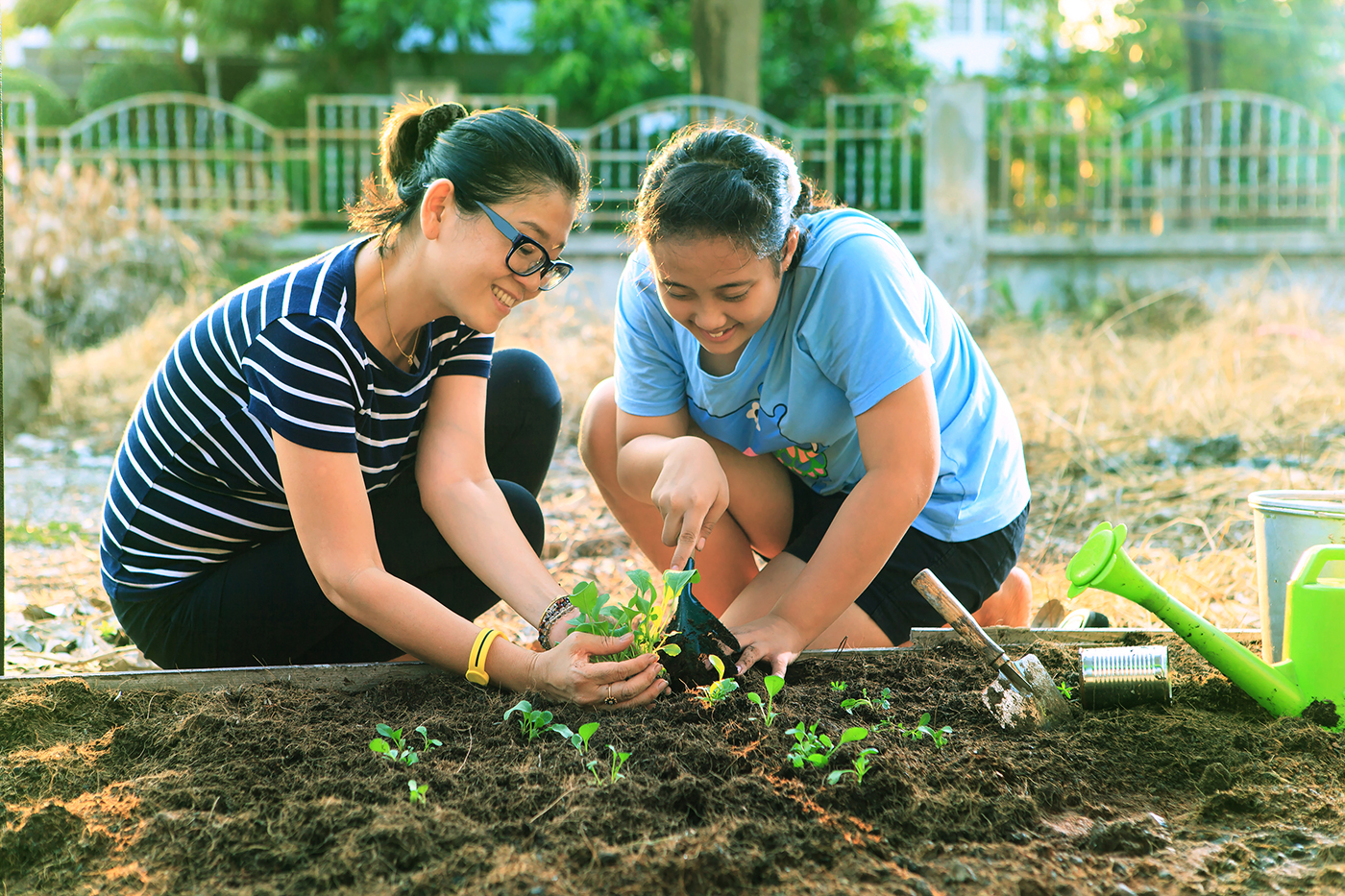 Finally, water again and ideally apply some mulch around the plant to prevent weeds. Plants will grow quickly as they are sitting in a ball of wet soil. 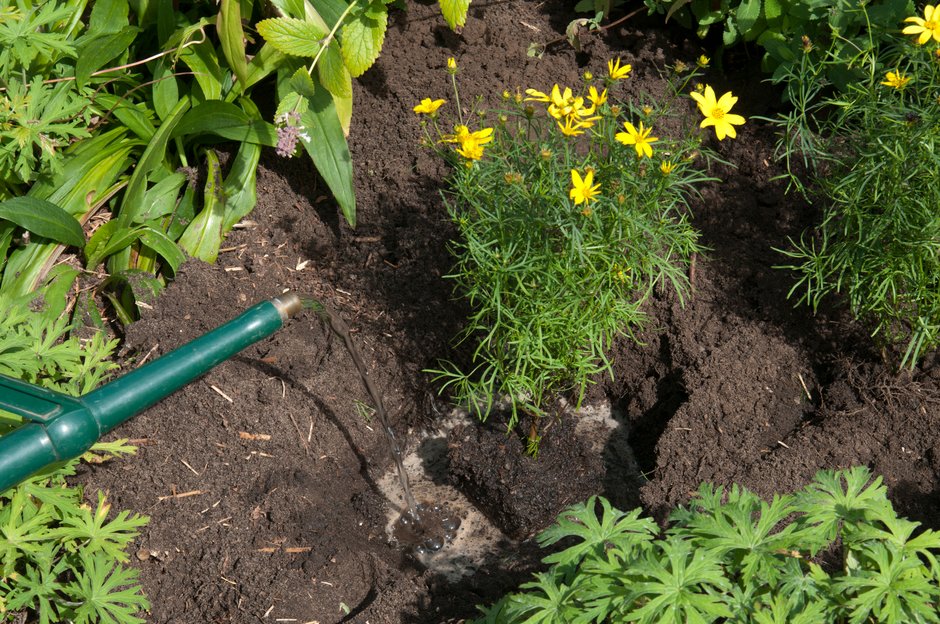 4. Position summer hanging baskets and containers outside
It is now safe to move pots and other containers outside as there is little or no danger from frosts. Make sure hanging baskets don’t dry out, keeping them moist but not too soggy. RHS research shows that just a mugful of water per day can keep hanging baskets healthy and avoid wasting water. Deadhead flowers regularly to prevent the plants going to seed, rather than continuing to flower. 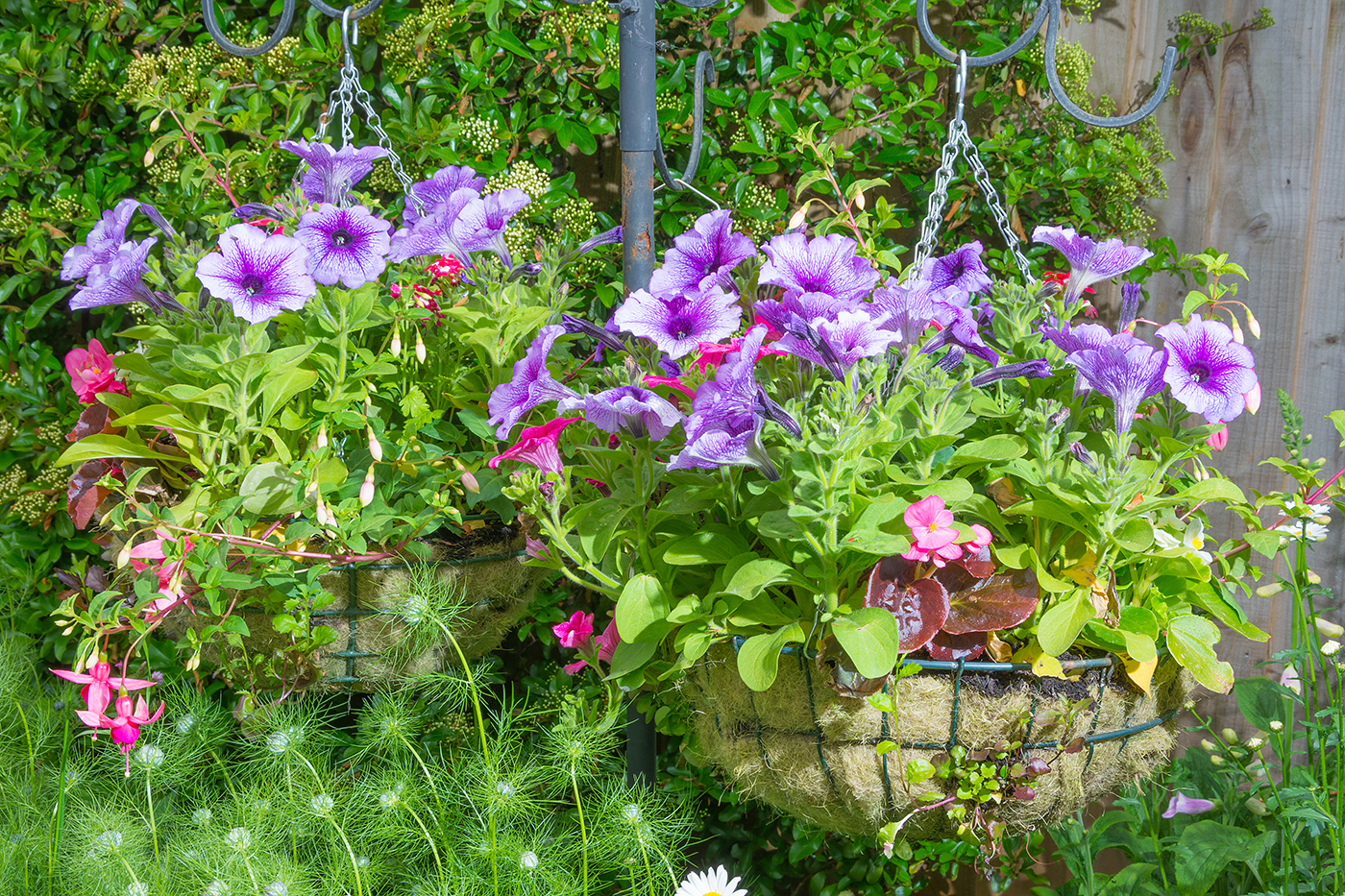 5. Mow lawns at least once a week
June is the time to mow once a week, ideally letting cuttings fall back into the sward to feed the lawn. This also avoids the chore of collecting and composting cuttings. It is also the first time of the year to cut long grass with bulbs in. Instead of watering lawns in dry weather, mow less closely and less frequently. Don’t worry if there are any dead patches as they will recover in autumn. 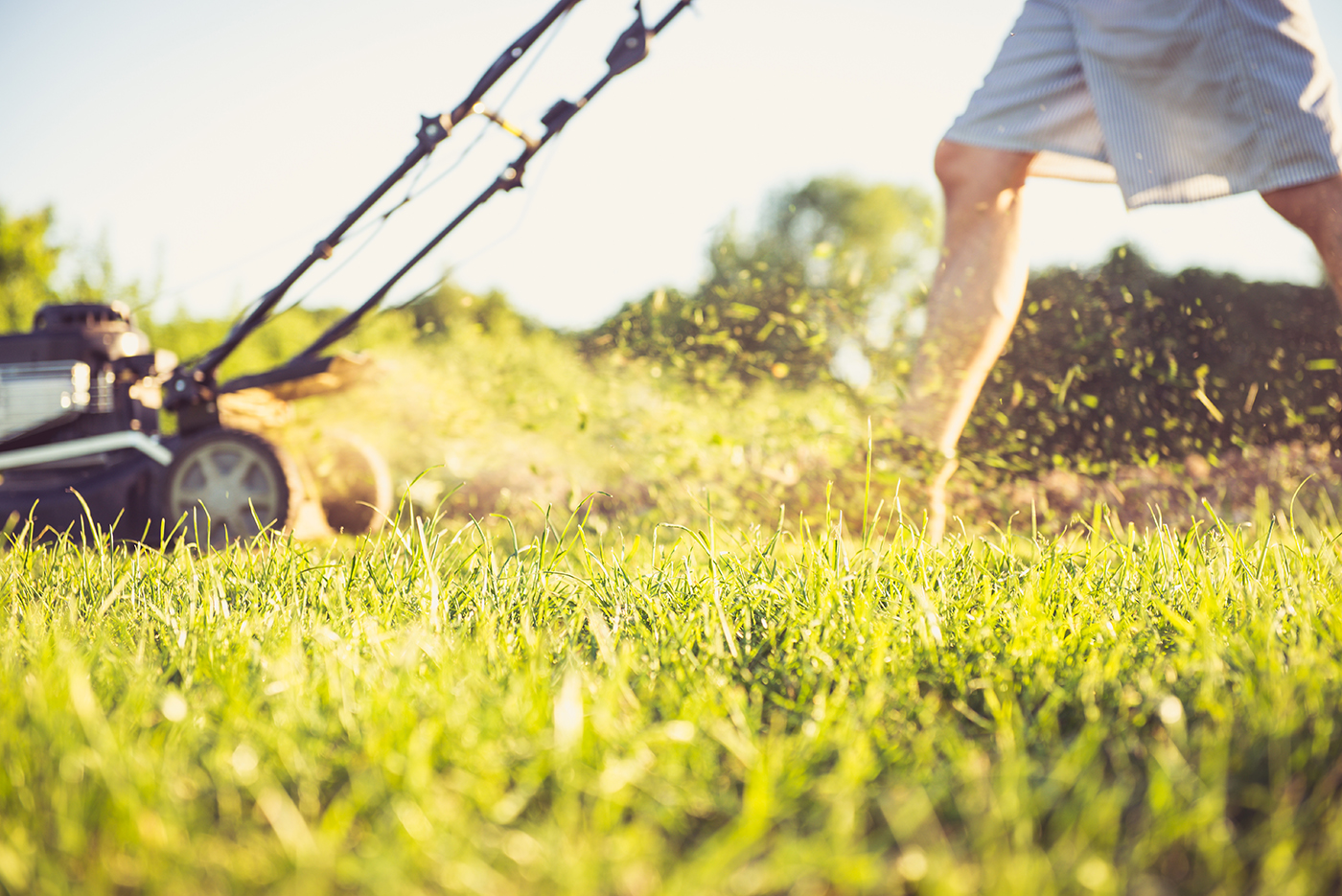