Our climate depends on how much of the Sun's energy is retained in the land, sea and air.

The primary driver of the Earth's climate is energy from the Sun. Most of the Sun’s energy that reaches the Earth is reflected back into space, but some is trapped by gases in the atmosphere as it radiates back from the Earth's surface. This is the "Greenhouse Effect", and it warms the Earth like a blanket.

Earth's climate is moderated by a set of interacting cycles: the atmosphere, hydrosphere (liquid and vaporised water), cryosphere (frozen water), land surface and biosphere (living organisms). These interact with each other and external forces including the Sun and human activity. 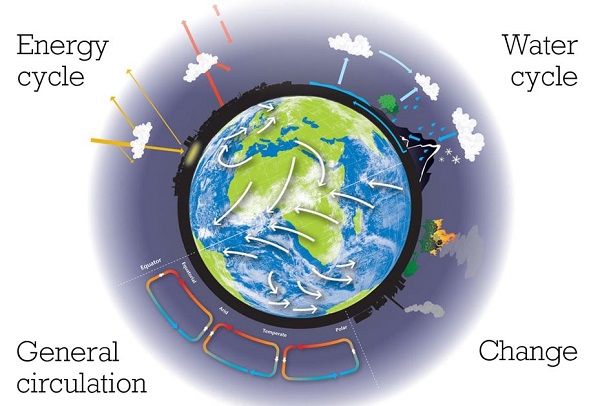 In addition to the nitrogen, oxygen and argon that make up most of the atmosphere (but are not affected by heat from the Sun or the Earth), other gases - carbon dioxide, methane, nitrous oxide, ozone and water vapour - absorb and emit infrared radiation. These are the greenhouse gases, which keep the planet warm enough for life to flourish.

Greenhouse gases
Greenhouse gases play a key role in the Earth's energy cycle. Because they absorb (and re-radiate) a lot of the heat radiated by the Earth, they tend to raise temperatures near the surface. The greenhouse effect occurs naturally, making the planet's surface temperature 30 degrees warmer than it would be without an atmosphere. It is essential to most life on Earth.

Ozone
Ozone in the lower part of the atmosphere acts as a greenhouse gas. Higher up in the stratosphere, the ozone layer absorbs solar ultra-violet radiation and affects how much of the Sun's heat is radiated back into space.

Aerosols
The atmosphere also contains solid and liquid particles (aerosols) and clouds, which interact with the incoming and outgoing radiation.

Water
Water vapour is the strongest greenhouse gas, and the most variable component of the atmosphere. For these reasons, and because the transitions between the various phases absorb and release much energy, water vapour is central to the climate and its variability and change.

The term hydrosphere refers to all liquid water, fresh and salt. The oceans cover approximately 70% of the Earth's surface. They store and transport a large amount of energy and dissolve and store great quantities of carbon dioxide. Compared with the atmosphere, their circulation is slow. They act as a regulator of the Earth's climate and also as a source of natural climate variability.

Ice sheets, glaciers and snowfields, sea ice and permafrost are important to the climate system. They are highly reflective of solar radiation, they have low thermal conductivity, large thermal inertia and they play a critical role in driving deep ocean water circulation. Because ice sheets store a large amount of water, variations in their volume are a potential source of sea-level variations.

Marine and land biology has a major impact on the atmosphere by influencing the uptake and release of greenhouse gases such as carbon dioxide, methane and nitrous oxide. Vegetation stores significant amounts of carbon, taken up through photosynthesis, and it also has a strong influence on physical land-surface properties such as reflectivity and roughness (which causes drag and affects wind).

Volatile organic compounds (VOCs) may also have important effects on atmospheric chemistry, aerosol formation and therefore on climate. The influence of climate on the biosphere is preserved in fossils, tree rings, pollen and other records and much of what is known of past climates comes from these indicators.

All of these systems are linked and strongly influence each other. For example, the atmosphere and the oceans exchange water vapour and heat through evaporation. This leads to condensation, cloud formation, precipitation and run-off, and supplies energy to weather systems. Precipitation influences salinity (ocean salt levels), its distribution and thermohaline (deep water) circulation. Atmosphere and oceans also exchange carbon dioxide, maintaining a balance by dissolving it in cold polar water and by venting it near the equator.