Find out more about snowflakes. How do they form and what gives them their unique appearance?

Snowflakes are one of the most recognisable symbols of winter weather. Every snowflake is unique and there is an infinite number of possible shapes they can form.

What is a snowflake?

A snowflake begins life as a tiny droplet of supercooled water which freezes in the sky to create an ice crystal. The droplet becomes frozen either because temperatures are sufficiently cold (it would have to be −35 °C or lower) to freeze to other droplets, or in clouds above -35 °C, they can form around a nucleus such as a dust or pollen particle.

Once the ice crystal has formed, if the conditions are right it will begin to grow, as water molecules in the air are deposited onto the ice crystal as it falls through the air, and clump together to form a snowflake.

Why are snowflakes hexagonal?

All snowflakes contain six sides or points owing to the way in which they form. The molecules in ice crystals join to one another in a hexagonal structure, an arrangement which allows water molecules - each with one oxygen and two hydrogen atoms - to form together in the most efficient way.

Part of the enduring appeal of snowflakes is their intricate appearance and near infinite variation, often leading to the assertion that all snowflakes are unique. While this in some sense impossible to test, as a general rule it is entirely true. The number of possibilities of changes in temperature and humidity as the snowflake falls to the ground is limitless. If you look closely at a snowflake you will see countless individual features, all of which could have formed ever so slightly differently in direction or shape owing to the slightest change in the environment in which it formed.

While snowflakes appear white as they fall through the sky, or as they accumulate on the ground as snowfall, they are in fact totally clear. The ice is not transparent like a sheet of glass is, but rather is translucent, meaning light passes through but not directly. The many sides of the ice crystals cause diffuse reflection of the whole light spectrum which results in snowflakes appearing to be white in colour.

Whilst the variation of snowflake shapes is infinite, they can be broadly categorised into groups which give an indication as to what conditions the snowflake formed in. Three of the broad types are: 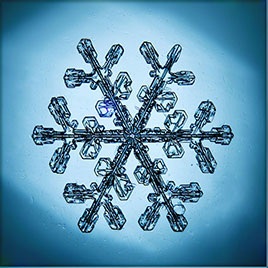 Perhaps the most eye-catching type of snowflake, the name means 'tree-like' recognising their branching structures . They form in very low temperatures of -20 to -25 °C where the atmosphere contains abundant moisture to allow the snowflake to form intricate patterns.

Plates are essentially part-formed dendrites, the begin to form their intricate patterns but cannot obtain sufficient moisture to form the branches so form a less intricate flat plate. These tend to form at warmer temperatures where there is less moisture in the air. 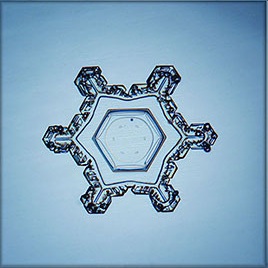 Similar to a thin plate, a sector plate snowflake again lacks moisture but forms a hexagonal structure often with a star-like shape in the centre and the more visible attempts to branch.