How do we measure wind chill?

There is no official definition of wind chill and definitions vary globally, dependent on how it is measured. In the UK, a system called the Joint Action Group for Temp Indices is used to realistically measure wind chill. This calculates wind chill by measuring how much heat is lost from a person's bare face at a walking speed of 3mph.

The 'feels like' temperature is especially important on windy days due to the effect of wind on the evaporation speed of moisture from skin, the stronger the wind, the faster the cooling of the skin. This has the effect of moving heat away from the body and making the surrounding air feel colder than it actually is.

'Feels like' temperatures throughout the year are particularly influenced by wind. An example of this is in winter when winds blowing to the UK from a north- easterly direction make the 'feels like' temperatures colder than the actual air temperature. On a calm day, our bodies insulate us with a boundary layer which warms the air closest to the skin. If it is windy, the wind will take the boundary layer away and the skin temperature will drop making us feel colder. 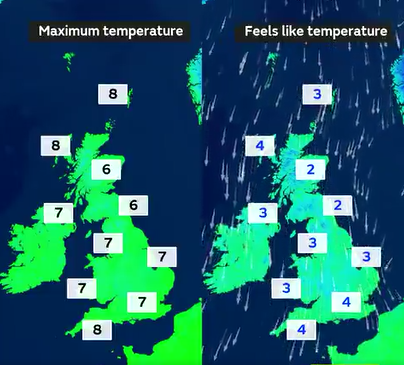