More observations would enable us to monitor the Sun for solar flares and coronal mass ejections (CMEs) and help us track them on route to the Earth giving more timely forecasts.  This is turn will help critical national infrastructure (CNI) providers better prepare for the severe events as described in the National Risk Register (added in 2011).

Why is an L5 mission important?

CMEs are large bursts of plasma from the surface of the sun and can reach the Earth in 18-96 hours, depending on its speed and direction. Given the right conditions, a geomagnetic storm associated with CME arrival can disrupt national power grids and global satellite and navigation networks.

Given the potential impacts, forecasting CME arrival time is crucial for reducing the impact to national infrastructure. Currently, with the satellite imagery available, determining the direction, speed and width of a CME accurately is challenging.  An L5 mission would allow a better calculation of these factors and greatly increase the precision of CME arrival. 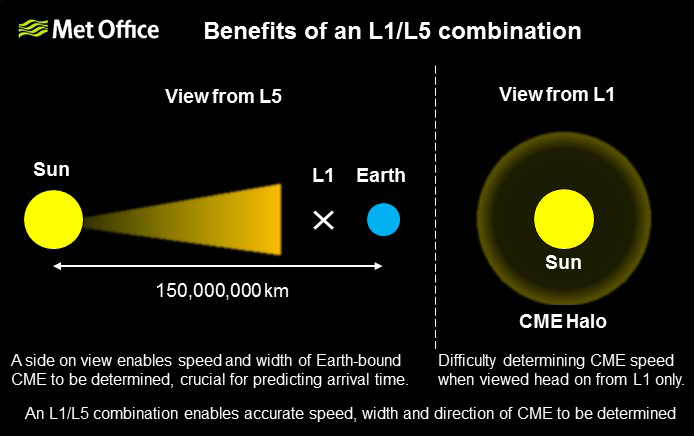 Why is current imagery not good enough?

It is difficult to estimate how quickly a CME is coming towards Earth when only viewed from L1.  The NASA STEREO mission launched in 2006 saw two probes, STEREO-A and STEREO-B, orbit the Sun in a similar path to Earth. They temporarily gave us side on views and demonstrated how useful this can be.  An L5 satellite would remain in a stable orbit permanently, resulting in continuous observations of critical regions of the Sun.

2015 and 2017 both held a workshop of international space weather experts, the summaries of which can be found here: