Blood rain is a term used when there is red-coloured rain falling from the sky, but what causes this to happen?

What is 'blood rain'?

It's understood that blood rain occurs when relatively high concentrations of red coloured dust or particles get mixed into rain, giving it a red appearance as it falls.

Blood rain is not actually a meteorological or scientific term - instead it's a colloquial phrase which can be found going a fair way back in history. With that in mind, there's no set definition for the term.

How does it happen?

The forces that drive our weather can be quite powerful and do some surprising things - including lifting things like sand or even small objects and transporting them large distances.

In the case of blood rain, strong winds or storms can whip up dust and sand. As this becomes airborne it can get caught up in atmospheric circulation, where it can be carried for thousands of miles.

Eventually the dust will either fall out of the sky due to gravity or will be caught up in rain clouds, where it mixes with the water droplets. When these fall as rain the raindrops could appear red. 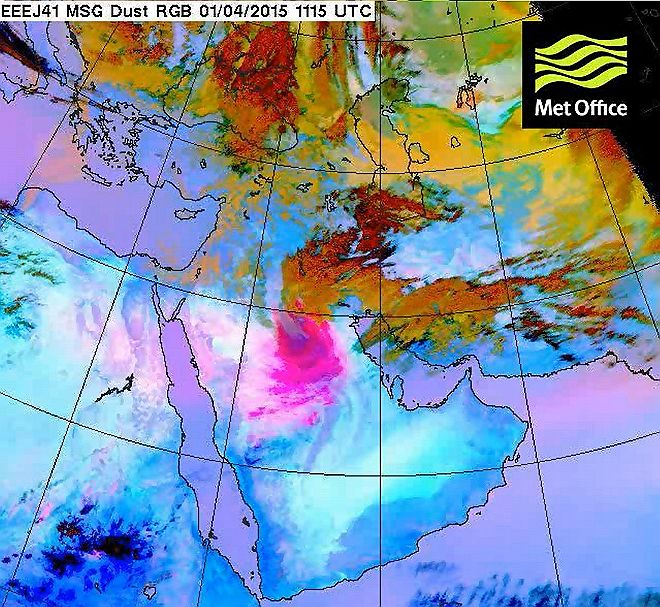 How often does it happen?

Documented cases are few and far between. In 2001 in the southern Indian state of Kerala, monsoon rains periodically fell with a red colour which was dark enough to stain clothes. There were also reports of rains of other colours during the same monsoon season - including green and yellow rain.

There are other, much earlier mentions of blood rain - even stretching back to Homer's Iliad, the epic poem which describes the siege of Troy which is thought to have been written around the 8th Century BC. It was, perhaps unsurprisingly, seen as a bad omen.

Do we get blood rain in the UK?

These days, in the UK at least, the term blood rain seems to be used much more loosely than the grandiose term would suggest.

Each year on several occasions the UK will see rain falling with some amount of dust mixed into it. This usually comes from the Sahara before mixing in clouds and falling out.

However, the dust we see is usually yellow or brown and mixed in very low concentrations - so the rain would look just the same as usual. The only difference would be that you might find a thin film of dust on your car or windows after the water has evaporated.

So we rarely if ever see 'proper' blood rain here in the UK, despite what the media headlines may suggest.