7 facts about rain to pour over

How long does rain take to reach the ground and where is the wettest place in the world? Find out some interesting facts about rain.

Under certain conditions, rain can fall from the sky without ever reaching the ground. It happens when rain falling from a cloud evaporates or sublimes as it approaches the earth's surface.

This creates what is known as Virga clouds, a tail or wisp extending from a cloud in a downwards direction and are generally seen to extend from Cirrocumulus, Altocumulus, Altostratus, Nimbostratus, Stratocumulus, Cumulus or Cumulonimbus clouds.

Perhaps you've been caught in the rain and wondered if its better to run as fast as you can to get out of the rain, or whether running into the rain will make you wetter than walking?

Recent research has suggested there is no easy answer affected by factors as varied as the individual's height-to-breadth ratio, wind direction and the size of the raindrops.

Professor Bocci who conducted the research in the Journal of European Physics did though offer the overall conclusion that "in general, the best thing is to run, as fast as you can - not always, but in general."

When raindrops fall on dusty or clay soils, they trap tiny air bubbles on the surface which then shoot upward - as in a glass of Champagne - and burst out of the drop throwing aerosols of scent into the air where they are then distributed by wind.

This is what is responsible for the familiar smell of rain and is called 'Petrichor'. 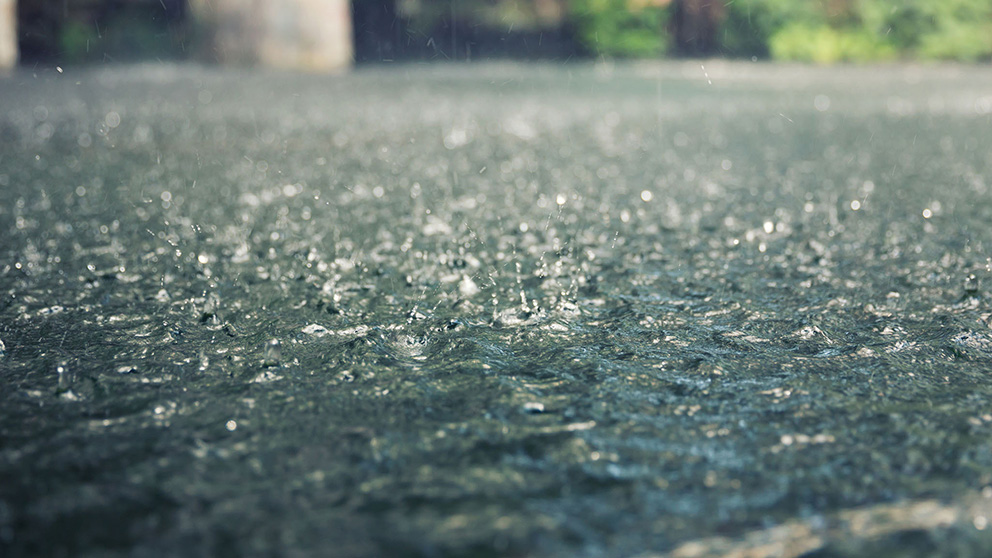 4. Shape of a raindrop

While raindrops are usually represented in the shape of a teardrop, in reality they are not.

When they first form high up in the atmosphere, they form a spherical shape as the water molecules bind together held by surface tension.

As they begin to fall their shape changes as they hit other raindrops, while air resistance causes the bottom of the drop to flatten and curve resembling the shape of a jelly bean.

5. How long does it take a raindrop to reach the ground?

Its difficult to give an exact figure as the height at which raindrops fall and their size vary widely, but given that raindrops fall at an average speed of around 14 mph and assuming a cloud base height of around 2,500 feet, a raindrop would take just over 2 minutes to reach the ground.

6. The wettest place in the world

The title of wettest place in the world goes to Mawsynram in the Maghalaya State of India.  It receives an astounding average of 11,971 mm rainfall each year. For comparison, the UK's average annual rainfall is 1154 mm.

The reason for its torrential downpours is its proximity to the Bay of Bengal and its situation 1400 m high in the Garo Hills, to the south of the Himalayas. The southwesterly monsoons pile in with moist winds which are caught against the mountains creating huge amounts of rainfall on the village.

Villagers weave "knups" out of bamboo which form a shell-like structure to shelter from the downpours.

7. The wettest day in Britain

The heavy rainfall was the result of Storm Desmond which brought widespread heavy rain and storm force winds to areas of Scotland and northern England.

The same rainfall event also saw the highest accumulations ever recorded in Britain for a 2-day period (405 mm) recorded nearby in Thirlmere.