Categorising the world’s climate into zones helps us understand the conditions in different regions and track how they change.

What are climate zones?

Climate zones are areas with distinct climates. These zones might correspond to weather patterns, latitude, or communities of plants and animals.

There are many climate classification systems, which define zones based on different climatic factors or combinations of factors.

Climate zones can track how conditions change in specific areas. They help us understand the ranges of plants and animals, including identifying species that may be under threat from habitat loss. Climate zones can even help farmers and gardeners understand which plants will grow best in their area.

The Köppen climate classification is one of the most widely used systems of climate zones. Originally developed by the climatologist Wladimir Köppen in 1884, it has had several revisions and changes over the years but has remained in use by scientists all over the world.

The Köppen system divides climates into five groups based on rainfall and temperature:

We then subdivide these groups, first based on their seasonal precipitation and then by temperature.

For example, we classify much of the UK under the Cfb category. This means we have a temperate climate (C), with no dry season (f) and a warm summer (b).

What is a microclimate?

A microclimate is a small area with a different climate to its surroundings. This could be due to nearby landmarks, such as lakes or hills, affecting wind patterns or sheltering the area from the sun. They can also be produced by artificial structures such as buildings.

The size of a microclimate can vary as it is simply defined as having a different climate to its surroundings. It could be as small as a few square metres, such as a shaded corner of a garden which certain plants will prefer. It could be larger, such as a sheltered woodland dell or an isolated mountain peak.

Many cities have their own microclimate or many microclimates, as buildings and artificial surfaces absorb heat during the day and create an Urban Heat Island, as well as altering wind flows.

To help explain climate zones, let’s look at some of the main ones in a bit more detail.

We divide climate zones by their latitude on the planet: 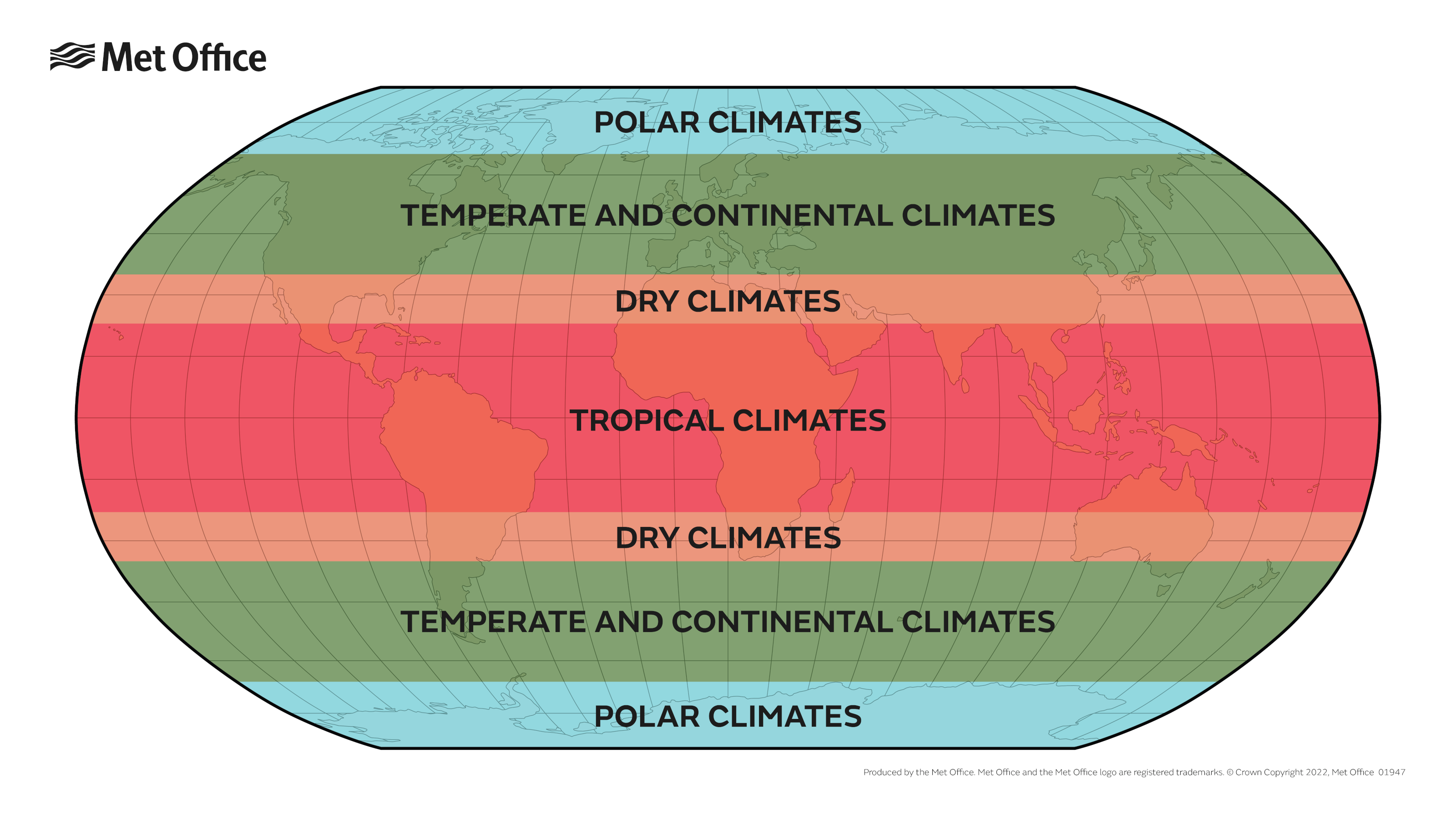 A simplified map of the world's climate zones.

Local weather patterns and the arrangement of continents also affect these zones.

For example, the UK has the same latitude as most of Canada but has a much milder climate. This difference is because of the influence of the Gulf Stream and the North Atlantic.

We also find very different climates in the western and eastern parts of continents because of the direction of prevailing winds.

Let’s take a closer look at some key climate zones — what defines them, and where we find them.

We find tropical rainforest climates in:

Lying either side of the equator, we characterise tropical rainforest climates by high temperatures and year-round rainfall.

Average temperatures are usually around 20–30 °C, with minor variation over the year.

Rainfall is over 60 mm of rain in every month, giving rise to thick jungles and some of the highest biodiversity seen on land.

Tropical regions also contain other climate zones, which are hot but have distinct dry seasons, unlike rainforests.

Tropical monsoon climates have a season of heavy rainfall, connected to a seasonal change in wind direction.

Tropical savanna climates have a more pronounced dry season than monsoon areas. They also have grasslands, rather than jungle.

Desert climates are extremely dry, and their cloudless skies lead to large temperature swings. Deserts have some of the hottest temperatures on Earth, but many will drop below freezing at night.

Though normally associated with hot, sandy environments, cold deserts also occur in many countries. The Gobi Desert of East Asia is one example, where annual average temperatures can be below 0 °C.

Whether hot or cold, deserts pose great challenges for the plants and animals that live there, which must adapt to extreme, prolonged water deficits.

We find temperate climates in:

We define temperate zones according to temperature. Their coldest month averages between 0 °C and 18 °C, but at least one month averages above 10 °C.

We subdivide temperate climates based on their maximum temperatures and whether they have a distinct dry season — either in summer or winter. Prevailing weather patterns or local topography can often influence this.

Continental climates (mostly found in Eurasia and North America) are broadly similar to temperate ones but have greater temperature extremes. This is because they are mostly in the continental interior, away from the temperature buffering effect of nearby oceans.

A Mediterranean climate is a specific type of temperate climate, characterised by dry summers and mild, wet winters.

This climate is often connected to weather patterns and prevailing winds. As a result, we typically find areas with a Mediterranean climate on the western coasts of continents.

Mediterranean climates often bring particular types of vegetation, such as the maquis in the Mediterranean, the chaparral in California and the fynbos in South Africa.

Prolonged cold defines a polar climate, with no months of the year averaging above 10 °C.

The ice cap climate dominates the Arctic and Antarctic regions. Here, no months average above 0 °C. Plants cannot grow, and snow and ice gradually accumulate until they slide or flow elsewhere as glaciers.

Ice cap climates can also occur at great altitude, such as the highest Himalayan peaks.

If the warmest month in an area averages between 0 °C and 10 °C, we classify it as a tundra.

In tundra climates, some plant life can grow, but the growing season is too short for trees. Instead, you’ll find dwarf shrubs, grasses, and other small plants.

Animals in tundra climates have adapted to the cold and include reindeer, musk ox, and Arctic hare.

Like polar climates, tundra climates can occur at altitude. When this happens, we usually call it an Alpine climate. The summits of Ben Nevis and Cairn Gorm are in the tundra climate zone. Northern Canada and Eurasia contain some of the largest areas of tundra, and it also occurs on various sub-Antarctic islands. 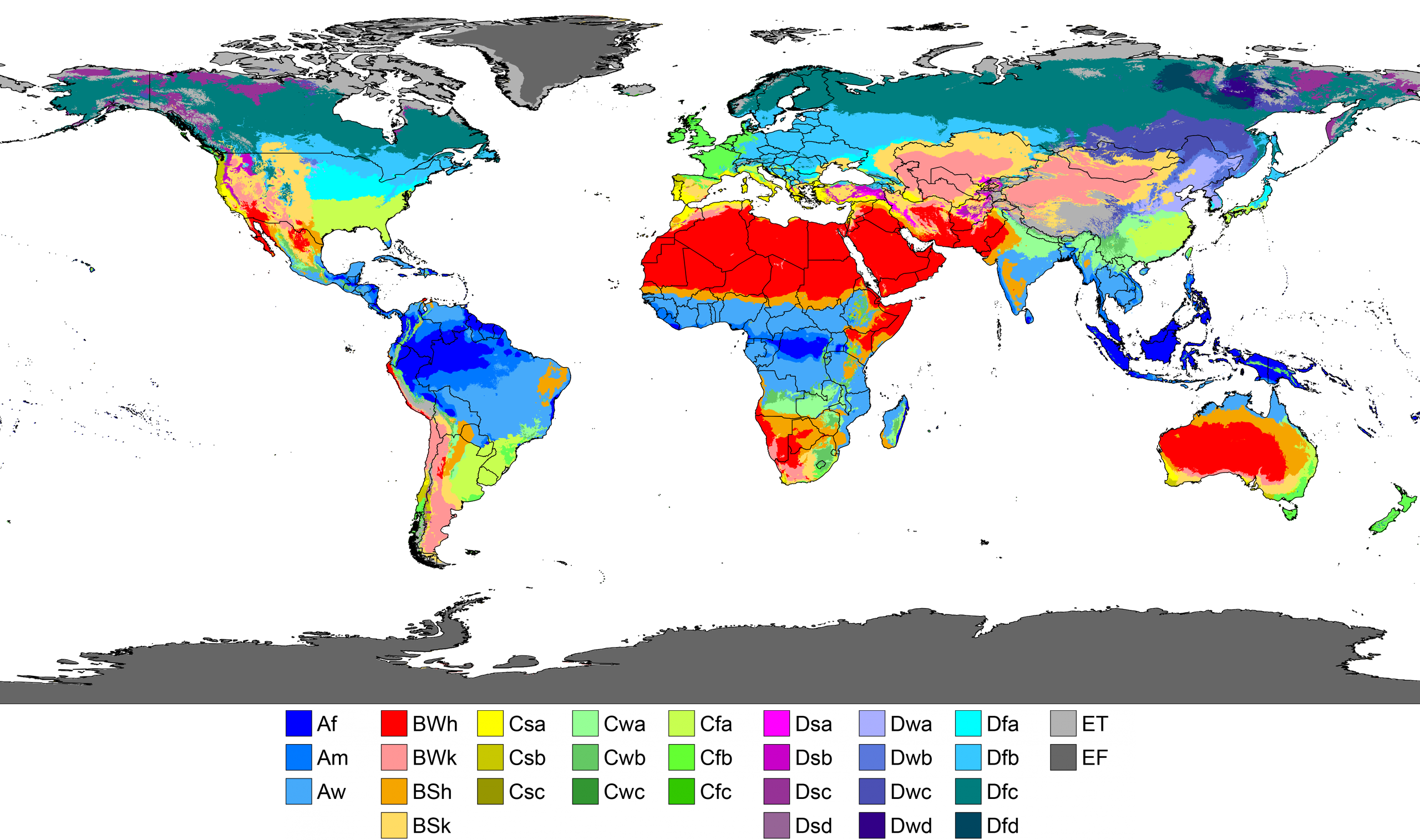 You can see that tropical climates are close to the equator, occurring in central Africa, central America, and parts of Asia.

We have dry climates in northern and southern Africa, most of Australia, parts of Asia and the western tips of the Americas.

Temperate climates spread across the continents. Most of western Europe has a temperate climate, but you also find it in eastern North America, parts of Argentina and south-eastern Brazil, and even the eastern tip of Australia.

Continental climates are mostly in the continental interiors of Canada and Russia, with some in the northern USA.

Finally, polar climates are in the most northern reaches of Canada and Russia, Greenland, and, of course, the Arctic and Antarctic.

Yes, the distribution of climate zones will change as the climate warms. You can find more information about these changes, and the precise classification of the climate zones, in a paper by Beck et al. (2018).