Climate is the general weather over a long period. This can include rainfall, temperature, snow or any other weather condition. We usually define a region’s climate over a period of 30 years.

The Earth’s climate system has many components. It includes everything that can affect the weather, such as the atmosphere, clouds, oceans, and the land surface and vegetation.

Ice also affects our climate, through glaciers, sea ice or ice sheets on land. Volcanic eruptions have an impact too, by altering our atmosphere. Human activity on a large scale can also affect the climate, including local weather patterns.

Most of the energy in our climate system ultimately comes from the Sun. 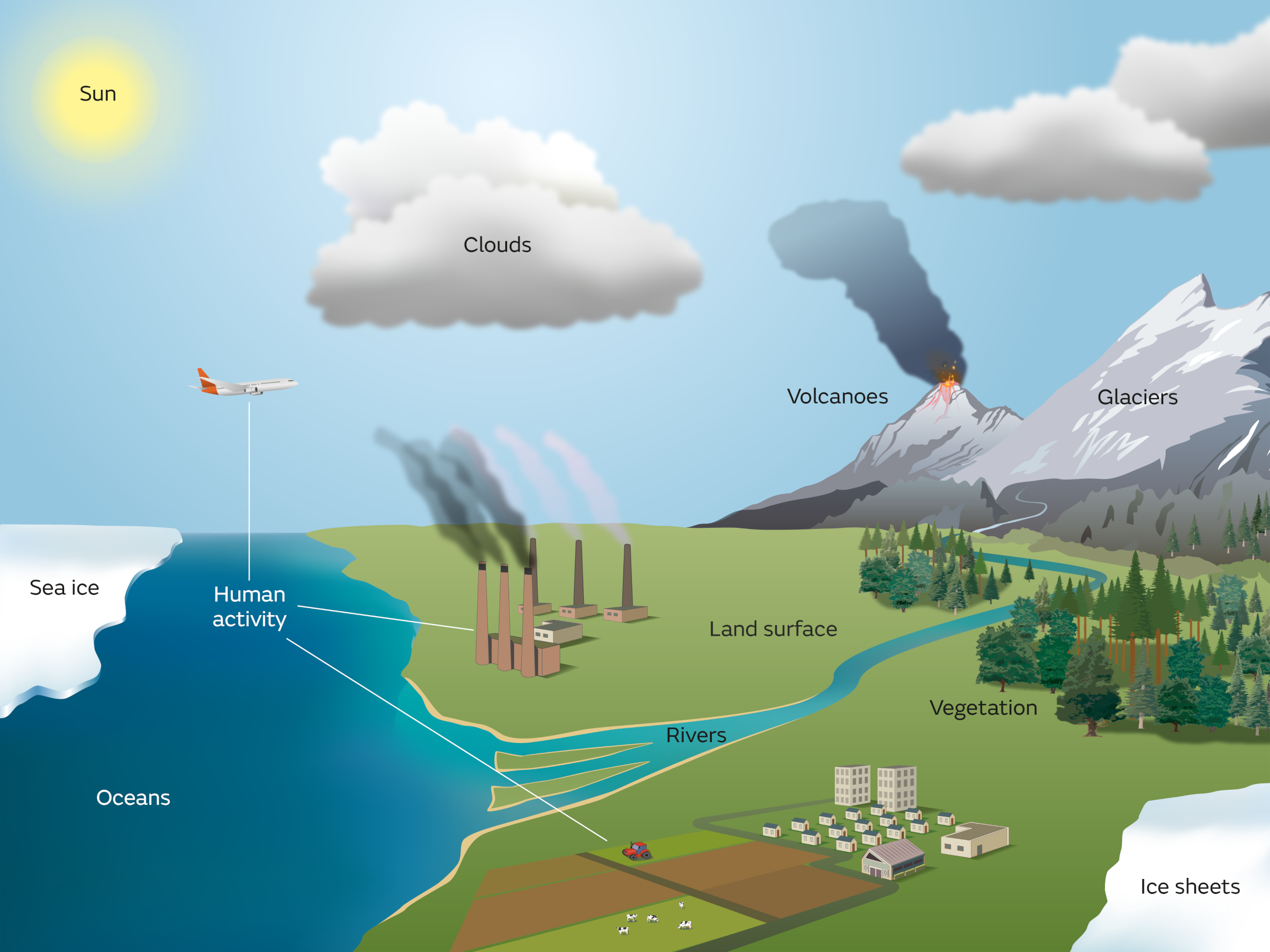 Components of the climate system

Changes in our climate system

When these components vary, the overall climate changes.

Changes in the Sun’s output impact how much heat enters the climate from space. Atmospheric changes can affect how heat is retained or modify cloud patterns. If land cover changes (like an ice sheet melting or a forest getting cut down) it can also produce changes in the climate.

What is the difference between climate and weather?

The major difference between weather and climate is the timescale. Weather occurs over hours or days. Climate, however, refers to the average of all weather that takes place over a much longer period, usually years or decades.

Some great writers have spoken about the relationship between climate and weather.

“Climate lasts all the time and weather only a few days.”

Heinlein captures the idea of climate representing a broad range of conditions, within which you will find your weather for the day.

A useful analogy for weather and climate is to think about your clothes — yes, your clothes.

Climate determines the clothes you should have in your wardrobe but the weather tells you what you should wear on a particular day. The UK can see a wide range of weather over a year, which requires many wardrobe options.

That, in a nutshell, is the difference between weather and climate.

Climate comprises many day-to-day values of the weather affecting a particular place. This could include average and extreme values, as well as the frequencies of values within a specific range. For example, how often does temperature exceed 30°C in a location? These values contribute to how climate affects people and the natural world.

Temperature is just one example. There are many other climatic elements, including:

The frequency and intensity of weather phenomena, such as storms, are also important climate variables.

Observing our climate and changes in climate data

Climate observatories collect data every day to define the climate of an area. We usually average climate data over 30 years but we can also express it over a calendar month, a season or even a decade.

This definition of climate is very important when we think about climate change. Since we define climate over a long period, climate change represents a long-term trend in the average weather. This changes how likely a particular weather event is to occur. For example, very low temperatures may become less and less likely as time goes on. Low temperatures could still happen but it would be much less often because of climate change.

How does the climate system work?

Our climate system can change because of either internal variability or external forcings.

Internal variability is a natural variation in the climate components. This may be cycles we can predict, or it may be random.

External forcings are separate from the five climate components. They include variations in the Earth’s orbit or the output from the Sun, as well as volcanoes. Human activities, such as the release of greenhouse gases and changes in land use, are other types of external forcings.