How we measure wind

The instruments used to measure wind are known as anemometers and can record wind speed, direction and the strength of gusts.

The normal unit of wind speed is the knot (nautical mile per hour = 0.51 m sec-1 = 1.15 mph). Wind direction is measured relative to true north (not magnetic north) and is reported from where the wind is blowing. An easterly wind blows from the east or 90 degrees, a southerly from the south or 180 degrees and a westerly from the west or 270 degrees.

Wind speed normally increases with height above the earth's surface and is much affected by such factors as the roughness of the ground and the presence of buildings, trees and other obstacles in the vicinity.

The optimal exposure for the measurement of wind is over level ground of uniform roughness with no large obstacles within 300 m of the tower. In practice few sites in the observing network meet this requirement exactly for all incident wind directions, but most are reasonably representative of an open site.

Wind speed is normally measured by a cup anemometer consisting of three or four cups, conical or hemispherical in shape, mounted symmetrically about a vertical spindle. The wind blowing into the cups causes the spindle to rotate. In standard instruments the design of the cups is such that the rate of rotation is proportional to the speed of the wind to a sufficiently close approximation.

At intervals of no longer than five years, anemometers are calibrated in a wind tunnel to identify any departures in the relationship between spindle rotation and wind speed specified by the manufacturer. Calibration corrections are applied to the measured wind speed. 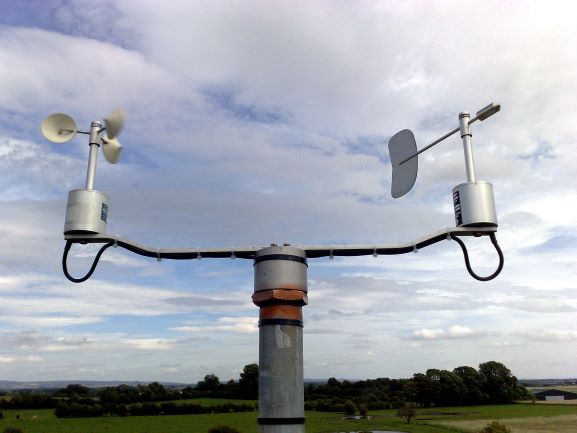 Wind direction is measured by a vane consisting of a thin horizontal arm carrying a vertical flat plate at one end with its edge to the wind and at the other end a balance weight which also serves as a pointer. The arm is carried on a vertical spindle mounted on bearings which allow it to turn freely in the wind. The anemometer and wind vane are each attached to a horizontal supporting arm at the top of a 10 m mast.

Where wind measurements are made in extreme weather conditions, such as on the top of mountains, a heated sonic anemometer is used having no moving parts. The instrument measures the speed of acoustic signals transmitted between two transducers located at the end of thin arms. Measurements from two pairs of transducers can be combined to yield an estimate of wind speed and direction.

The distortion of the air flow by the structure supporting the transducers is a problem which can be minimized by applying corrections based on calibrations in a wind tunnel. 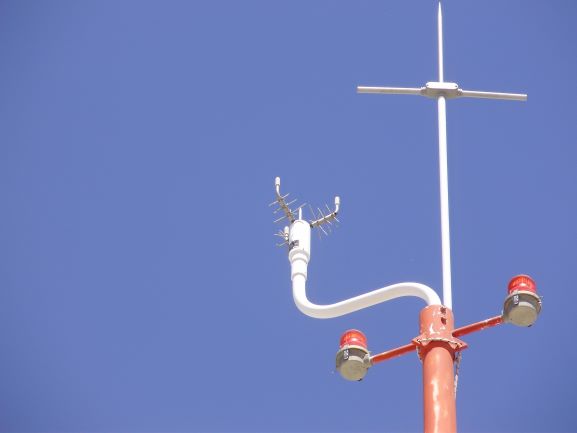 Because wind is an element that varies rapidly over very short periods of time it is sampled at high frequency (every 0.25 sec) to capture the intensity of gusts, or short-lived peaks in speed, which inflict greatest damage in storms. The gust speed and direction are defined by the maximum three second average wind speed occurring in any period.

A better measure of the overall wind intensity is defined by the average speed and direction over the ten minute period leading up to the reporting time. Mean wind over other averaging periods may also be calculated. A gale is defined as a surface wind of mean speed of 34-40 knots, averaged over a period of ten minutes. Terms such as 'severe gale', 'storm', etc are also used to describe winds of 41 knots or greater.