How we measure cloud

Take a look at how we observe the type, amount and height of clouds.

The large scale distribution of cloud is best measured from space in either the visible or infra red part of the spectrum. This satellite imagery is revealing in many ways, but it has its limitations for the measurement of cloud, in particular:

To meet these shortcomings cloud base measurements are made from all surface synoptic stations.

How we measure cloud type

The standard method for classifying clouds is based on the World Meteorological Organisation criteria. The classification is made in terms of the level of the cloud (high, medium or low) and various cloud genera specified by the cloud form and its features.

Common types of cloud include cumulus, cumulonimbus, stratocumulus and stratus at low levels; altocumulus, nimbostratus and altostratus at medium levels and cirrus, cirrocumulus and cirrostratus at high levels. Cloud type reporting is generally only possible where a human observer is present.

How we measure cloud amount

Cloud amount is reported in oktas or eighths with the additional convention that:

A laser cloud base recorder is used to estimate partial cloud amount. For each layer of cloud identified by the instrument a time weighted average is used to derive the average amount.

Such measurements are by their nature only representative of the cloud that has passed directly above the instrument, not of the total sky that is on view from the station. Total cloud amount is only reported from stations where the human observer is present.

How we measure cloud base height

Cloud base is readily measured by instrument to a reasonable level of accuracy. The type of cloud base recorder used widely at synoptic observing stations is shown below.

It employs a pulsed diode laser LIDAR (light detection and ranging) technology whereby short laser pulses (eye safe) are sent out in a vertical or near vertical direction. The backscatter caused by reflection from the surface of cloud, precipitation or other particles is analysed to determine the height of the cloud base.

Many modern cloud base recorders are capable of detecting up to three cloud layers simultaneously. 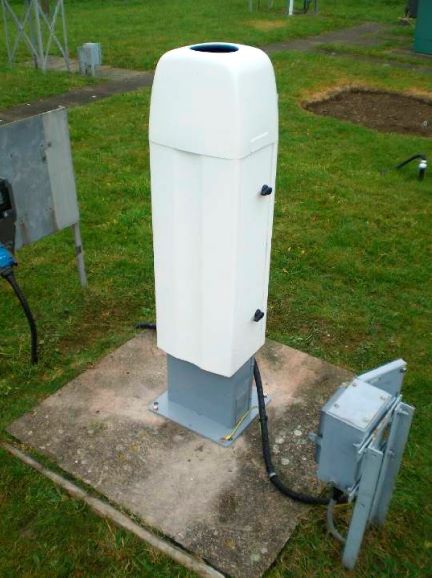